The Girl and The Angel - Released 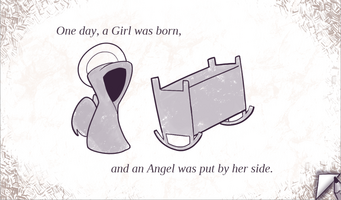 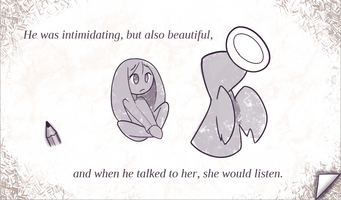 Hello, I'm glad to present to you a small project I've been working on for the last month. It's called The Girl and the Angel, and it is an illustrated fable that you discover page by page. It is an extremely short read, probably less than 5 minutes, but I still think that it can leave you something (I hope at least).

This has been one of the hardest project I've ever done, despite its simplicity, and it ended up taking almost ten times my initial approximation of one weekend to complete it. The reason is not in the implementation: I've been using the Godot Engine to develop the game, and I have to say it's the best 2D game engine I've ever worked with. The problem lied mostly in the story itself: it is something that I had written a long time ago, and it has been haunting me for the longest time.

I ended up working on the story to the point that it is now completely different from where it started. I still have some problems with it, but I think it is rather successful in representing my original idea.

I hope that you will play it. Please let me know what you think if you do.

Get The Girl and the Angel

The Girl and the Angel

An interactive fable about undying friendship